Dale is the former Web Content Coordinator for the Porirua City Council. She also managed the Toastmasters New Zealand website for ten years until June 2012 and from 2014-17, as well as a number of private websites, and the Spinnaker Toastmasters club website. 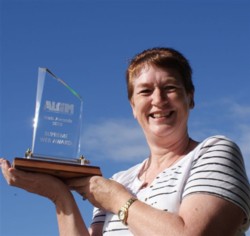 On 3 May 2010 the Porirua City Council received the Supreme Web Award for the best New Zealand Council website at the ALGIM Web Symposium. The first year the award was made, Porirua City Council was 23rd, and the second year, 2009, it was 3rd. At the 2011 ALGIM Web Symposium the PCC website was runner-up in the Supreme Web Award. In 2012 the Council received the Excellence in Innovation Award for the Porirua City Council's Sports Grounds Updates website. In 2013, the Reserve Finder website was a finalist in the ALGIM Best New Website category.

Dale is a qualified and experienced IT Trainer, and Webmaster. She has a Diploma in Information Systems (for Business), the Certificate in Tertiary Teaching, and the Certificate in Web Design. Dale was a member of the Office Systems Advisory Committee at Whitireia Community Polytechnic for several years. In 2019 Dale taught the Levels 3 and 4 Business Technology and Administration programme at the Horowhenua Learning Centre in Levin.

She is the mother of two sets of twin boys, and has two grandsons and two grandaughters. She is the oldest in her family, with 7 brothers and sisters, and 8 nieces and nephews.

She has an interest in photography, and genealogy, having published 3 family history books and two websites documenting the history of her father's and mother's families.

Dale also enjoys travelling and visiting new places. She is hoping to do her big OE with her husband Mike sometime before she finally retires.